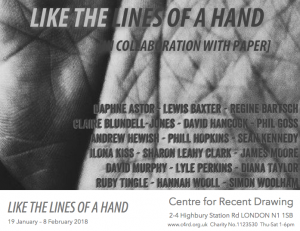 The title of this exhibition is taken from Italo Calvino’s novel Invisible Cities. It is the starting point for a group of 18 UK based artists associated with PAPER and C4RD.

Each artist chose a line, a brief passage, or a chapter title from the book, which explores layers of imagined and fictional vistas through the descriptions of cities by explorer Marco Polo. The book itself consists of brief prose poems describing 55 fictitious cities but which are all actually just descriptions of one city, Venice.

The chosen pieces of text, highlighting the dialogue with Invisible Cities, acts as a discrete, non-linear curatorial discourse between the works in the exhibition by the chosen group of artists. The individual works in ‘like the lines of a hand’, often reference and play with the complexities of inventive language and narrative, as explored in Invisible Cities.

The work can be viewed during opening times at 2 – 4 Highbury Station Road, Highbury Islington N1 1SB, London. C4RD is a Registered UK Charity 1123530, and would particularly like to acknowledge the support for this exhibition of the Dovehouse Trust.